A Day in the Life: Independent Living

Bob Heitmeyer was a recent widower when he decided to move into Cedarhurst two years ago. There were a few nerves when Bob moved into his one-bedroom Cedarhurst apartment, but it wasn’t long before Bob felt comfortable in this community. New friends, fun activities, and freedom to drive helped make the transition a positive one.

Bob knew he was ready for independent senior living, but his children were less ready. They had all the worries many people think of when they hear “senior living.” There were concerns over putting their beloved dad in a “home.” They worried about quality of care and the quality of the senior living community, and they didn’t quite understand what independent living meant for their dad.

However, once they toured the community and got to know the staff, Bob’s family realized independent living was a great idea for their dad.

Almost immediately, Bob found new friends. Soon, wherever Bob went, you could also find his posse. They meet each other for meals, and they love to get together to play pool and cards. While the activities are fun and they enjoy meals together, the friendships go deeper than that.

Bob says that their group looks out for each other. They provide support when someone needs it, and they’re always taking care of each other’s needs. If one of them is late for a meal, the others know to go and check to make sure their friend is having a good day.

Is it the right time to downsize? Learn about your options and get personalized results in about 4 minutes.

Cruising Through This New Life Phase

Now, meals and activities with his bros are great—Bob loves his new friends. But there’s something else he loves: driving.

Cedarhurst provides transportation so Bob can get a ride wherever he wants to go. However, Bob loves to drive and still has his car. When he has a doctor’s appointment or an errand, Bob just hops in his ride and drives himself. He likes that he has the option to be driven, but he prefers to still get behind the wheel and put the pedal to the metal.

Bob is like most humans: He loves a routine. He knows that every day, he’s going to meet his friends for meals and get to do the activities he loves best, like exercising. It’s rare for Bob to miss a 10 a.m. exercise class. He says they’re a lot of fun, and he loves to keep moving.

After the loss of his beloved wife, Bob was on his own in his home. He had a lot of responsibilities, but not a lot going on to look forward to. Too many people think that someone aging at home is always preferable to a senior living community—but that attitude is slowly changing as more and more people experience the enriching life that independent living brings.

Bob is the ideal example of how independent living helps seniors live their best lives. If he had stayed in his old home, Bob may not have had the fun, active schedule he has now at Cedarhurst. As a matter of fact, too many seniors who age at home experience isolation and loneliness that can lead to more serious issues, such as dementia.

Additionally, the difference in cost of staying home versus moving into an independent living community may surprise you. With so many onsite perks often included in the community price, plus all home maintenance and upkeep already taken care of, independent living is more affordable than many people assume. This is especially true when compared to the financial and physical burden of monthly household maintenance and general upkeep, plus everyday expenses like groceries and entertainment.

Keeping an Eye on the Horizon

When active seniors can live in a community that provides them with opportunities for new relationships, new experiences, and new interests, they continue to thrive. Bob put it best when he commented on why he loves living at Cedarhurst so much: “Here, I look forward to things.”

Some of the things that Bob looks forward to include a variety of social and enriching activities like games and cards, outings to cultural events, and enjoying the unique talents and interests of other residents. When you move into a Cedarhurst community, you don’t leave your intellect and skills behind—you share them!

People choose independent living for a variety of reasons—the ease of a zero-maintenance lifestyle, the social opportunities, and the convenience. Bob wanted all of those things, and in addition he has a few health issues that make him appreciate the proximity to help and medical care when he needs it, as opposed to living on his own. He knows one day, he’ll need more care and likely will transition into assisted living. By choosing independent living now, he’s in a situation where can age in place and get all the services he needs.

One thing that really impressed Bob during his move into his Cedarhurst community was the level of care staff took when interviewing him. They asked very specific and comprehensive questions to ensure he was right for independent living.

“They really wanted to make sure that I didn’t need a higher level of care,” he said. “They really were careful to ensure everyone had what they needed, and everyone was safe.”

In addition to assisted living services, Cedarhurst also provides memory care services. If a senior in independent living needs more care after a few years, it’s there. The community team will help both the senior and their families make a plan and stay informed, ensuring that seniors like Bob have both the freedom and support they need in this next stage of their life.

Before moving into Cedarhurst of Sedalia, Bob was well known throughout his community. He worked as a youth specialist at the University of Missouri extension office for 38 years, and he was also a real estate agent for 14 years. Additionally, he worked as a seasonal agriculture inspector.

Bob is a true Renaissance man.

He brings that spirit to his Cedarhurst life, where Bob makes his days what he wants them to be, putting on his shades and taking a nice drive when he feels the urge. Most of the time you can find him hanging out with his new friends, which is very important. For people of any age, making friends outside of your inner circle of loved ones is beneficial—and for seniors, it’s crucial.

Bob is going to continue living his best life, and he can rest assured that he’ll have everything he needs, when he needs it. For now, his focus is on being a good parent, grandparent, and friend.

These are just the highlights of Bob’s fascinating independent living journey. Get the whole story in our new “A Day In the Life” story.

Is it the right time for senior living?

Is it time to get help?

Having the Conversation: Talking to a Parent About Senior Living

The Power of Connection for Senior Health

A Complete Guide to Financial Planning for Senior Living

A Short Story: Life in a Senior Living Community

Is it still safe to drive?

The True Cost of Keeping Mom at Home

What is Assisted Living and Does My Loved One Need It?

How Can I Afford Senior Living?

Why Cedarhurst Senior Living Is Different Than Other Communities

Is it the right time to downsize?

The Difference Between Care Types at Senior Living Communities

What are Different Ways to Pay for Senior Living? 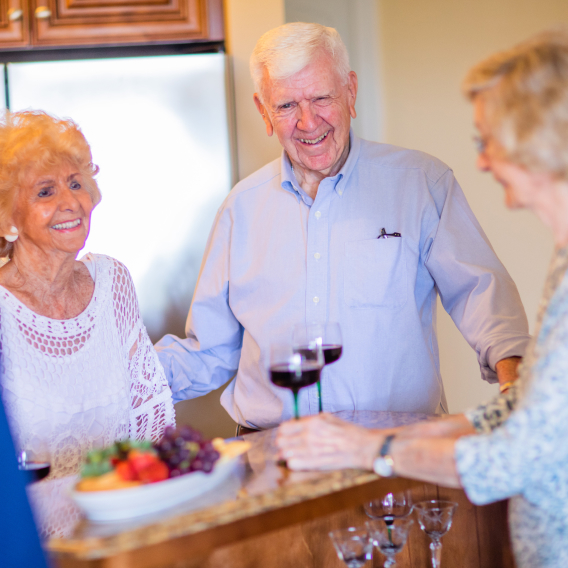