How we’re responding to the COVID-19 virus.
Learn More

Doris helps one of her friends in the community who recently had a stroke. “You have to look out for your friends.”

No matter where she is or what she’s doing, for Doris and her family, Sparta will always be home. Born just outside the town’s limits in her parent’s house, Doris and her husband, Bob, lived in Sparta for 39 years. She was a teacher for the Sparta school system for 37 years. Additionally, Doris’s brother, Delbert, served as the mayor of Sparta for 12 years. Sparta was Doris’s family; a place where she thrived, built a life, and enjoyed her days.

When Doris and her brother learned about the new Cedarhurst Assisted Living opening in town, they made a pact to move in together. Unfortunately, Doris’ brother passed away before they were able to follow through on their pledge to one another. Doris, always loyal to her roots, wanted to honor her brother’s agreement. She moved into Cedarhurst shortly after it opened.

Since then, Doris has embraced her new home in her hometown more than she ever dreamed possible. She’s centralized her love for Sparta within the Cedarhurst community and even had a few of her friends move in recently.

“Everything about Cedarhurst is good,” said Doris. “If I’m not at an event or activity, they always ask where I am. Everyone here is very caring. All of them are just special and we’re lucky to be here. This is a great place and I hope everyone here is as happy as I am.”

Doris kept her promise to her brother, and the Cedarhurst team has kept their promise to Doris’ family: a vibrant experience full of love, fun, and friendship.

For Katie, making new memories has been just as fun as remembering the old ones.

For Katie, making new memories has been just as fun as remembering the old ones.

She was born and raised in St. Louis, MO with her sister and two brothers; her summers spent dreaming about the family she wanted someday. Katie eventually met the love of her life, they got married, and, together, they moved to Granite City, IL. There, Katie and her husband raised 3 beautiful children. They filled their days with laughter, adventure, and, ultimately, 7 grandchildren and 8 great-grandchildren.

Then, Katie’s husband fell ill. They were instructed by his doctors that he would not be able to return home. Katie’s daughter, Janet, sprang into action. She didn’t want her parents to be sitting idly in a nursing home. She wanted them to have a new place where they could continue their journey together and maintain the same ability to get out and enjoy their lives. That’s when they found Cedarhurst.

Katie became very ill one morning and although she was alone, she was able to get to her emergency cord to call for help. Janet is eternally grateful for the quick actions that her mother’s caregiver was able to provide and is convinced that Katie would have also passed away that day had it not been for the Cedarhurst staff.

Katie began her story at Cedarhurst to accompany her husband, but she has grown to love it as her own home. She has developed into a new phase in her life; one with many friends, its own adventures, lots of new laughter and with her pride and joy, Sophie (her dog), always by her side. Both Janet and Katie delight in knowing that there are many new memories to be made while Katie is safe and enjoying her golden years.

If it weren’t for being at Cedarhurst of Collinsville, I wouldn’t have been able to experience the Honor Flights like I did. It was a life changing experience.

Born and raised in Collinsville, IL, Earl is a mover, a shaker, the father of a daughter, and grandfather to three wonderful grandchildren. Working as a chief aviation electrical technician for the US Navy and Local 309 in his later years, Earl had the pleasure of traveling across the entire country. He found Cedarhurst shortly after his wife passed away, and was happy to return to his hometown to spend his golden years alongside friends and family.

Earl wanted to let you know that returning to his hometown, does not necessarily mean that he is “settling down.” In keeping with the wanderlust of his younger years, Earl loves the outings at Cedarhurst. He and his family dine out frequently, and he enjoys going into the community to visit local restaurants and the American Legion. As a crowning adventure, Cedarhurst sponsored Earl to visit Washington DC in the fall of 2014 with the Honor Flight network, a program that flies veterans to the Nation’s capital to visit memorials and honor their service to the country.

“If it weren’t for being at Cedarhurst of Collinsville, I wouldn’t have been able to experience the Honor Flights like I did. It was a life changing experience. I even met Bob Dole in Washington. Staff and residents from Cedarhurst and some of my family rode the Cedarhurst bus to the airport to pick me up when I returned. Seeing everyone and their support really touched me. I feel like I really am loved here by so many folks” said Earl.

Among the “folks” that care for and adore Earl is his dog, Bogie, named after Humphrey Bogart.

For Earl, moving in was only the beginning. Coming back home has renewed the independence he cherished in his life. His care extends beyond the walls of Cedarhurst, into the lives of his family who love him dearly, and out into the community. Cedarhurst is Earl’s partner on his next journey.

“The minute we walked in the door we were greeted and saw activities going on with staff and residents. We didn’t see that at any other community. Cedarhurst has been the best decision she’s made!”

If you were to tell Marilyn: “You’re too old for that,” She’d flash you a smile, shake your hand, and power-walk off to prove you wrong. After 66 years of marriage, raising three kids, and moving to Cedarhurst, Marilyn has discovered the secret to being young at heart.

Marilyn has always been a very active woman. She gains energy from activities that drain most people. However, when Marilyn’s husband passed away, she developed some health issues and her children, Mary Ellen and Dennis, began to worry about her safety. That’s when Marilyn’s family discovered Cedarhurst: “The minute we walked in the door we were greeted and saw activities going on with staff and residents. We didn’t see that at any other community. We left from our tour with a sense of friendliness and comfort. Cedarhurst has been the best decision she’s (Marilyn) made!”, said Mary Ellen.

Today, Marilyn is as committed to staying active as she was before she lost her husband. She particularly enjoys Cedarhurst’s group exercises, appropriately named Ageless Grace, YMCA Exercise, Balance and Agility to name a few: “It’s so important to stay active. It’s so much fun and so silly”, said Marilyn.

Always the social butterfly, she has made a plethora of great friends since moving in and, in keeping with Marilyn’s passion for movement, one of their favorite things to do is travel the 215 miles to Branson, MO.

So what’s the secret to staying young at heart? Marilyn and her family might say daily social activities, and great care; so you can enjoy your golden years in a safe and active community. 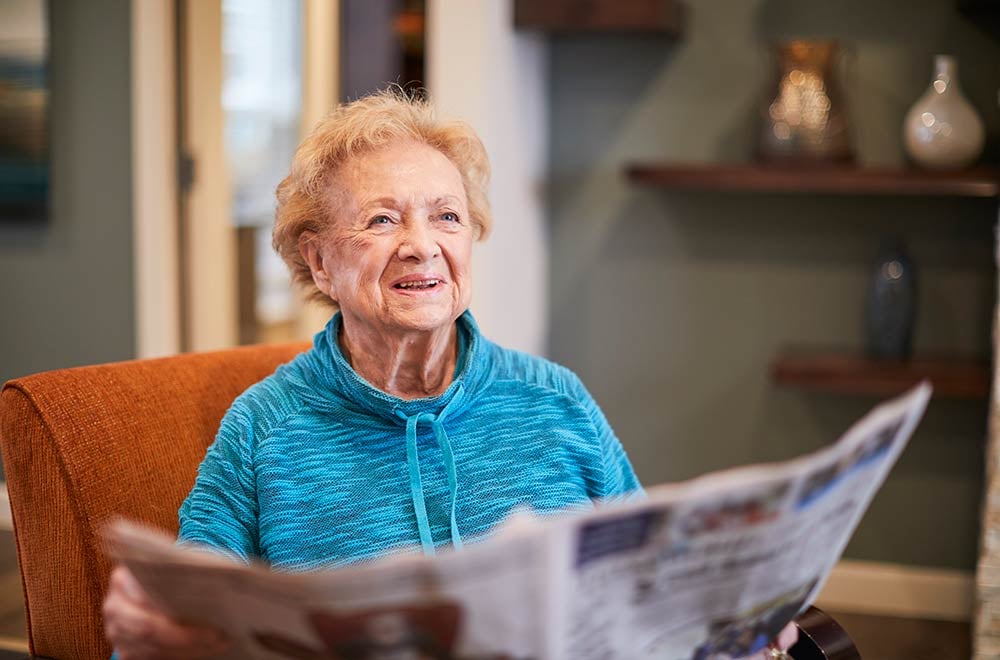 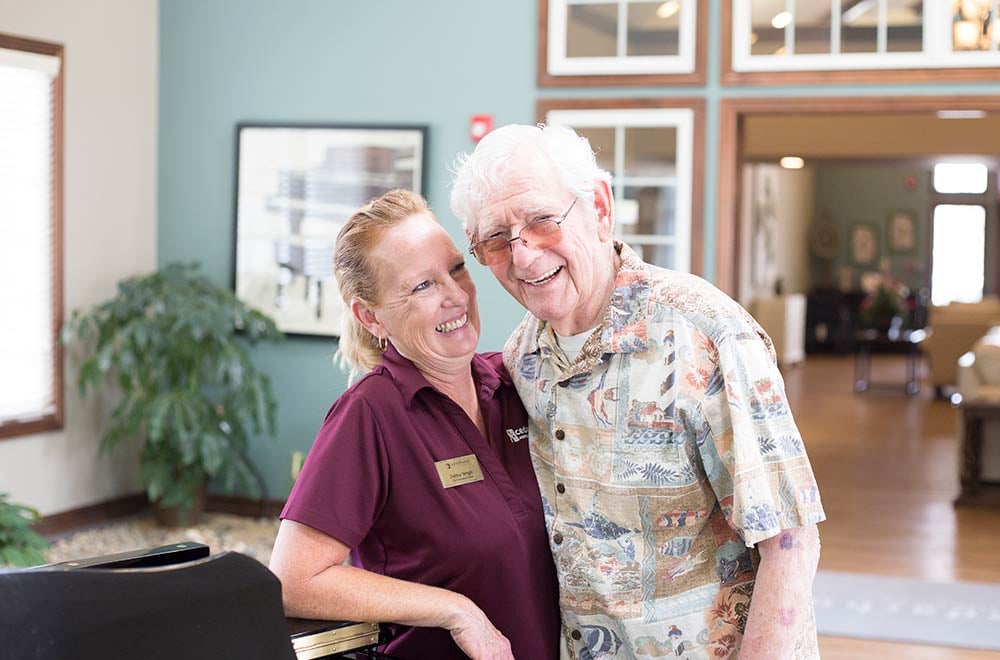 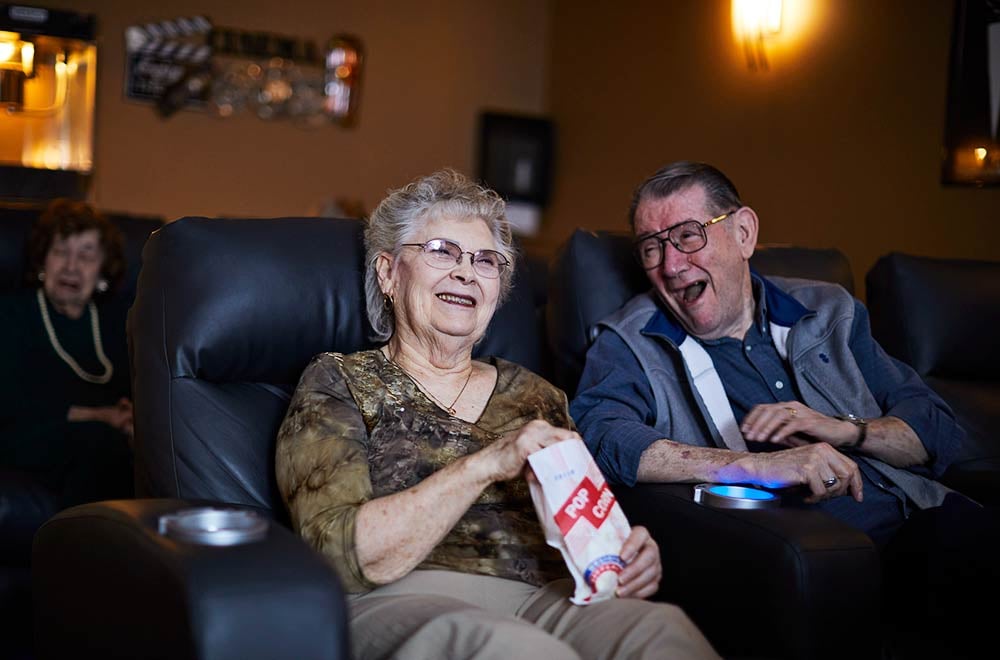 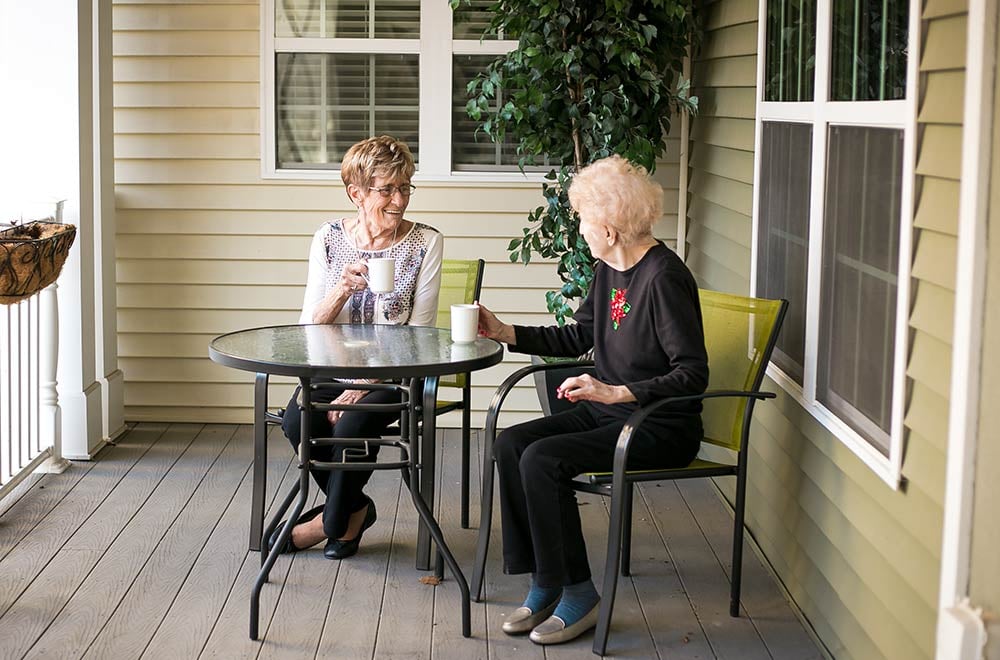 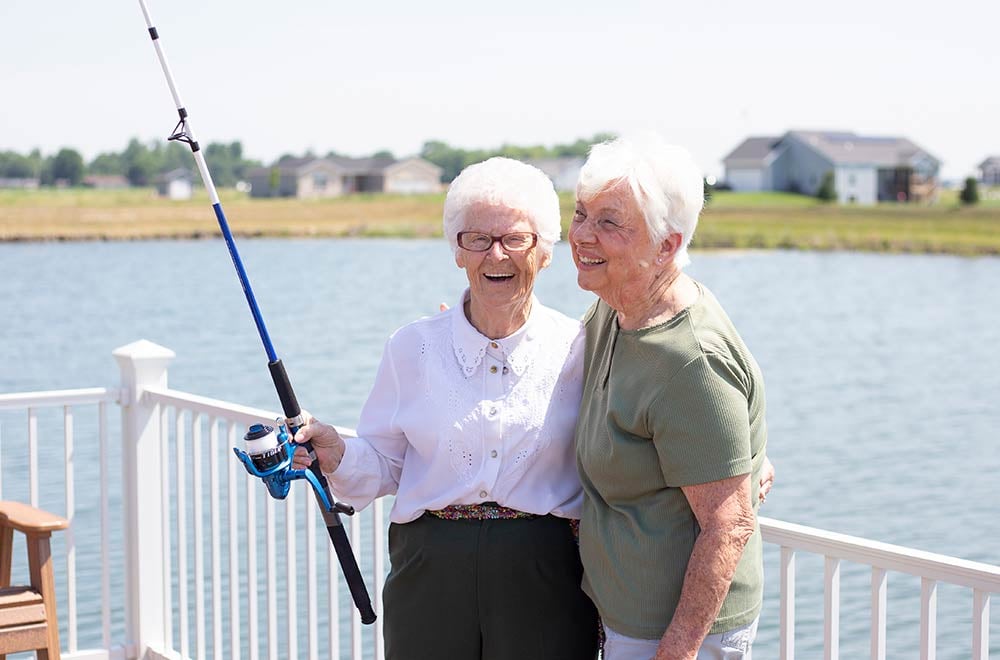